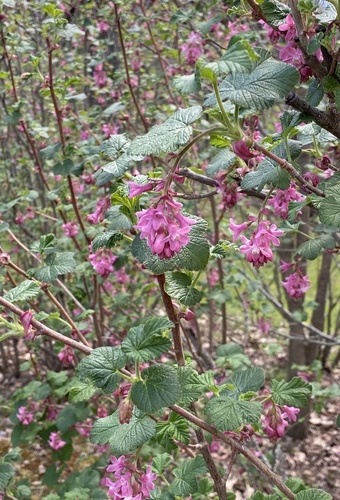 Get to know: Pink Flowering Currant 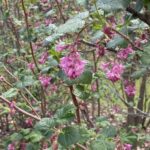 As thousands of homes were lost in the Almeda fire, thousands of hummingbird feeders along Bear Creek were vaporized along with them. We wondered, “What native plants could take their place?”

Ribes sanguineum, aka Pink Flowering Currant, is a prime candidate. This perennial shrub is one of the first to bloom each spring, putting out clusters of tubular flowers that nectar-sippers love. Caterpillars are also known to feast on this plant’s foliage, while the berries that develop in the summer are enjoyed by songbirds and small mammals.

According to iNaturalist, nearly two dozen species of Ribes (currants) can be found in the Klamath Mountains ecoregion, but Ribes sanguineum may be the most common species used in landscaping and restoration projects. It is easy to start from cuttings, or seeds can be direct sown in fall. This plant tolerates a wide range of conditions, but does best in forested or shady sites.

The Native Plant of the Month column is contributed by the Rogue Native Plant Partnership. Their spring plant sale will be held in April; sign up for their e-newsletter via their website to get the details.