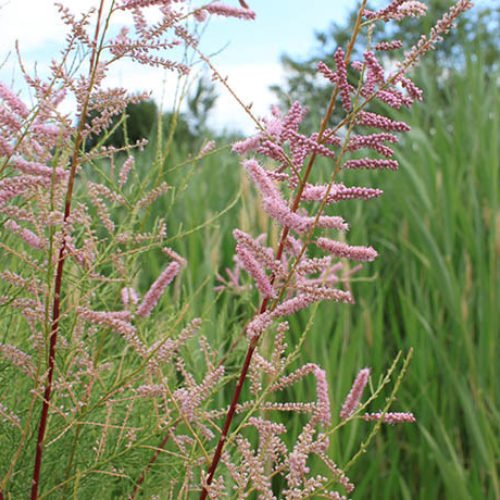 Salt cedar, also known as tamarisk, is an invasive shrub or small tree that is found across the American West. Populations are prevalent along waterways east of the Cascades, but last week members of the Applegate Partnership & Watershed Council identified it along the mainstem Applegate River near Provolt.

The plant was intentionally introduced to the West in the 1800s as an ornamental, windbreak, shade, and erosion control species. They can grow to be anywhere from 1-18 m and foliage ranges from dark green to a light grey-green depending on the species.

Ecosystem impacts from salt cedar can be significant. They provide poor wildlife habitat, restrict access to rivers, and increase soil salinity, making it capable of easily displacing native species like cottonwoods and willows. Their leaves are flammable which can serve as potential fuel, significantly increasing an area’s wildfire risk.

Conventional control methods, including mechanical cutting and herbicide applications are effective but limited by cost. Communities in the Colorado River Basin have successfully used the Tamarisk Beetle as a biocontrol.

Please notify info@roguepartners.org if you see this species growing in the Rogue Basin.