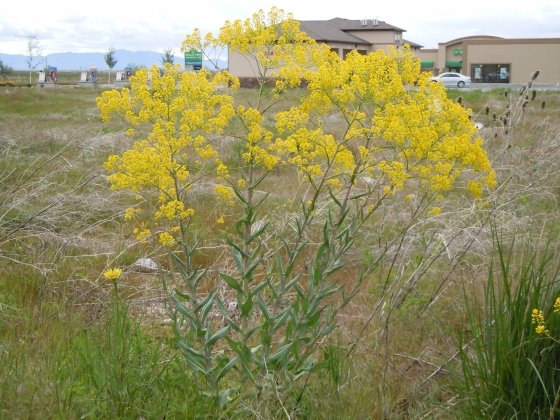 Dyer’s Woad (Isatis tinctorial) is a problematic, invasive weed that has become established across thousands of acres of western rangelands. Colonists first introduced the species to the eastern United States as an important source of blue dye. Alfalfa seed contamination has allowed the plant to successfully colonize pastures, rangeland, and riparian areas in California, Oregon, Idaho, Utah, Wyoming, and Montana.

This striking yellow plant is an aggressive weed with allelopathic properties (it produces chemicals which inhibit growth in nearby plants.) It is a biennial herb that grows to four feet tall. During the first growing season, plants remain in the rosette form, produce a deep taproot, and store nutritional reserves. In year two the plants bolt, flower, and produce seed. All leaves have prominent whitish veins on the upper side of the blue-green blades, which makes plants easy to identify. Like many mustards, dyer’s woad has small, yellow, attractive flowers, which appear in spring. The distinctive drooping seed pods turn from yellow to purplish-black at maturity. Encased in the protective pods, seeds can survive eight years or longer!

In established infestations, it is critical to prevent plants from producing seed to prevent further spread. Hand removal can be effective, but difficult because of the deep taproot which can grow up to four feet in length. If flowers or seeds are present, plants should be uprooted, bagged, and removed from the field. In April, RBP’s team of weed experts from the Jackson and Josephine County CWMAs started treating Dyer’s woad populations along the mainstem Rogue and Applegate Rivers.

Please notify info@roguepartners.org if you see this species growing in the Rogue Basin.