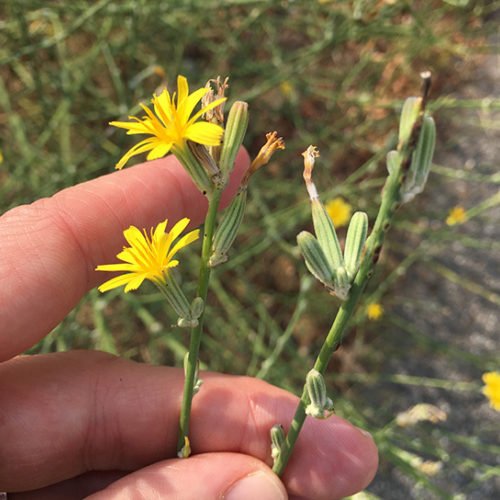 Rush skeletonweed (Chondrilla juncea). “Chondrilla” is an old Greek word for, generically, a plant resembling chicory. Rush skeletonweed belongs to that large aster subfamily which, characterized by ligulate inflorescences (that is to say, uniform florets each featuring a long strap-shaped petal) and milky sap, includes such familiarly weedy members as dandelions, chicory proper, and lettuce.  (Indeed, a common name for this plant in Italian is lattugaccio, meaning “lettuce, but the worthless sort.”)  The specific epithet “juncea” derives from “juncus,” and can be literally translated as “rushish” or “rush-like.” Both “rush” and “skeleton” of the common name describe its growth habit when mature: numerous stems featuring but few minute, linear cauline leaves, giving a vegetatively skeletal appearance, with flowers borne on these usually naked stems, like a rush.

A Eurasian native, the plant was likely introduced to America as a contaminant of imported hay.  It is an agricultural pest because of its aggressive colonization of disturbed areas, monopolizing soil moisture with deep, fast-growing roots and thereby outcompeting desirable vegetation.  Unpalatable to most livestock, the stiffly fibrous branches can interfere with the operation of haying equipment and reduce the quality of hay which it contaminates.  In forests, its propensity to invade following natural or anthropogenic disturbances reduces forage availability for wildlife, inhibits natural regeneration of the forest, and reduces botanical species diversity.

Numerous flowers produce numerous seeds without any need for pollinators; like many asters, these small seeds float in air and are dispersed by wind.  Tilling or ploughing rush skeletonweed can fragment root systems: new plants can often grow from root fragments, so that soil disturbance can increase the density and extent of a given infestation while simultaneously diminishing competing vegetation.

Rush skeletonweed is increasing in the Rogue Basin area.  Because soil disturbance can promote the plant, non-soil disturbing treatments are indicated, such as flaming of seedlings, or herbicides.  Where appropriate, promoting or stimulating competing vegetation can also inhibit rush skeletonweed.  When treating with herbicides, use herbicides selective for broadleaf or specifically asteraceous vegetation to minimize damage to potential competitors.