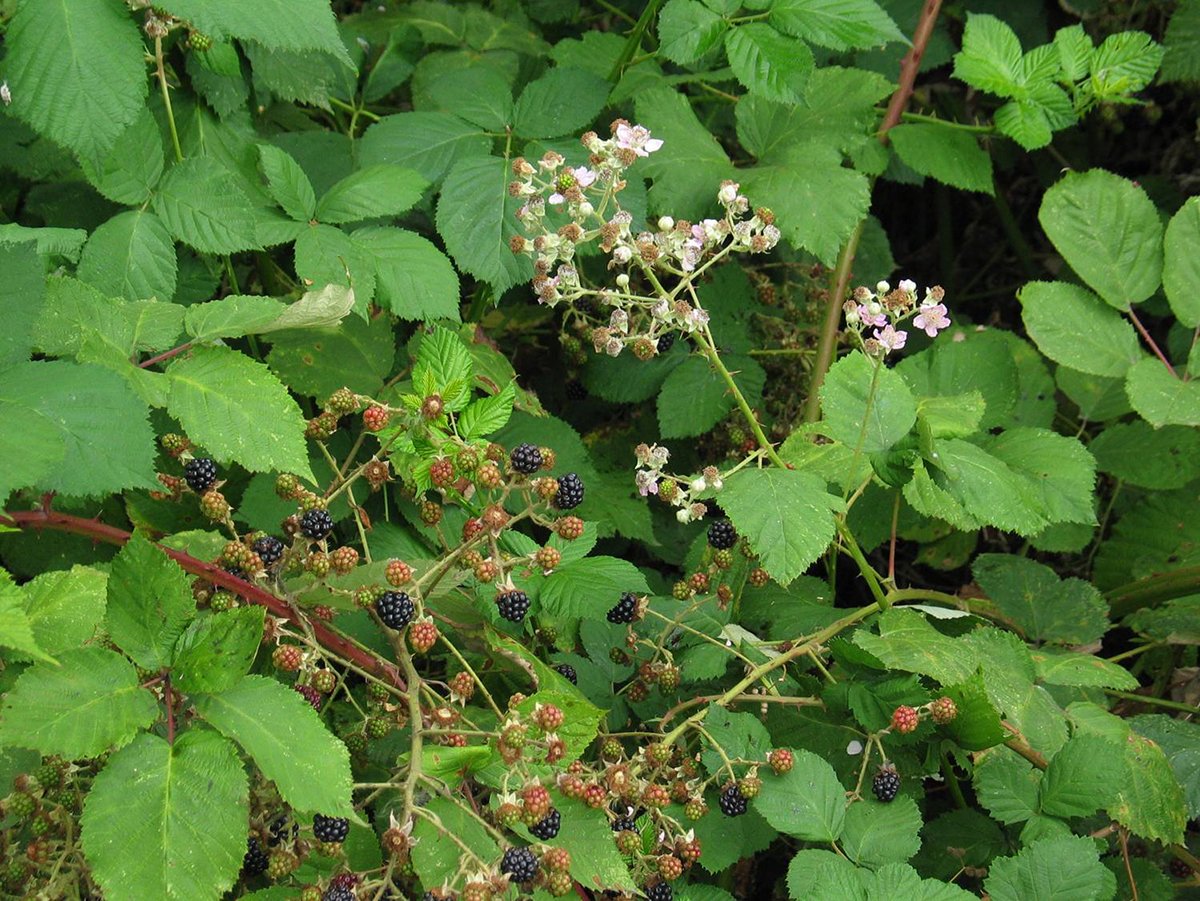 Himalayan Blackberry has spread to all parts of the Rogue Basin except at the higher elevations. Where it used to be found only along ditches and streams, now it appears even in drier upland areas. It grows quickly, forming an impenetrable thorny thicket. Large berries appear in late summer which are edible. When people speak locally of blackberries, this is the plant they are usually referring to. It is native to northern Iran and not the Himalayas, and so there is an effort to rename it Armenian Blackberry. It was brought to America in the late 1800s as an agricultural crop, and to Oregon in 1922 as part of a breeding program where it quickly escaped cultivation. It is now found throughout western Oregon, spread by birds and other animals that feed on berries.

Another local invasive berry with similar growth and form is Evergreen Blackberry (Rubus laciniatus), with leaves deeply lobed with a lacy appearance. Seeds of both plants are spread by birds and other animals that feed on berries.

Why should I care?
This weed, besides being a nuisance in backyards, parks, pastures and along roadways, has disrupted many native streamside habitats in our area. Along the Rogue River it dominates by choking out understory natives, often climbing 12 feet or more into trees. It does well in forestland where it competes with conifer seedlings and displaces natives.

What to do?
If you have just a few smaller plants to deal with, dig them out! Plants can pop up in home gardens, spread there by birds or irrigation water. The roots are a rhizome, but they can usually be removed with a shovel when soil is moist. For larger plants or extensive thickets, digging is usually not practical. Mowing alone does not work, because plants will continue to resprout. The same is true for burning through the dead canes at the appropriate time. Grazing with goats has been tried, and eventually will wear the plants down, but requires a lot of effort to manage and is not appropriate for most areas.

Contact (vs soil-acting) herbicides have proven to be the most effective tool for controlling large infestations.One method is to remove canes by mechanical means (mowing, mulching or scraping), then waiting until resprouts appear and spraying those. This requires several resprays to be effective.

Another method is to spray uncut canes and allow them to die in place. Once dead they can be mowed or mulched, or allowed to break down on their own (which takes 1-2 years). Resprouts should be minimal because of the greater uptake of herbicide by the full plants. Access to the center of large berry clumps is difficult.

Regardless of which control method is used, the area that grew blackberry once will grow it again, so revisits are needed to keep these weeds out. Often these areas will be recolonized by natives on their own after a few years, especially in riparian areas. Nursery-grown natives are also available.

With herbicides in general, the more leaf area sprayed relative to root mass, the better the control will be. There are several types of contact herbicides available and approved for this use, and as always, follow label directions.

More information and treatment strategies can be found in: