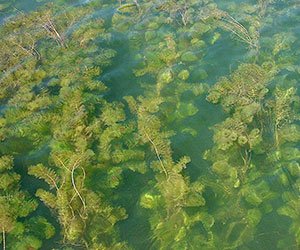 By RBP StaffDecember 10, 2019November 26th, 2020No Comments
Eurasian watermilfoil (Myriophyllum spicatum) is an invasive submersed perennial aquatic weed. It’s a member of the massive Haloragaceae family. It’s not native to North American and it is believed to call regions of Asia, Europe, and North Africa home. The first M. spicatum specimen was collected in Washington D.C. in 1942 and by 1985 M. spicatum populations were verified in 33 states. Oregon herberia records indicate that it arrived to our waters in the late 1960s or early 1970s. One local example is a large infestation that grows in Lake Selmac.

M. spicatum can be recognized by its feather-like leaves in whorls attached to flimsy pinkish stems. The leaves are further divided into several slender leaflet pairs. Leaflet pairs in the high teens are a good way of distinguishing M. spicatum from other species in its genus. This troublesome aquatic weed is often confused with the native Northern Milfoil (M. sibericum). To make identification harder, Eurasian watermilfoil has hybridized with the native. Large infestations of the hybridized milfoil can be found in the Southern Oregon mountain lakes region including Howard Prairie and Hyatt Lake. It mostly reproduces vegetatively so it can spread by stem fragments and rhizomes.Eurasian watermilfoil can grow in a range of flow conditions: in canals, rivers, and wind driven currents in lakes and ponds. It can grow in deep clear water like Lake Tahoe and Crater Lake, as well as, thrive in eutrophic conditions. It mostly reproduces vegetatively, so plant fragments can spread rapidly downstream by currents or from lake to lake as fragments attached to a boat, motor, or trailer. Once established, dense monocultures of M. spicatum can have multiple impacts to water resources, including: obstructing flow in water conveyance systems, altering fish and aquatic invertebrate habitats, and increasing siltation in gravel beds.

First step to controlling M. spicatum is to prevent its introduction to new waters by inspecting and cleaning watercraft in between waterbodies. Once it is established, M. spicatum can be controlled by cultural, mechanical, and chemical methods.

A Eurasian native, the plant was likely introduced to America as a contaminant of imported hay.  It is an agricultural pest because of its aggressive colonization of disturbed areas, monopolizing soil moisture with deep, fast-growing roots and thereby outcompeting desirable vegetation.  Unpalatable to most livestock, the stiffly fibrous branches can interfere with the operation of haying equipment and reduce the quality of hay which it contaminates.  In forests, its propensity to invade following natural or anthropogenic disturbances reduces forage availability for wildlife, inhibits natural regeneration of the forest, and reduces botanical species diversity.